Fisrt timers to the event, one of the biggest and most popular ocean water swims held in Victoria at the Troquay front beach, Point Danger, Madeleine Rhodes and Dylan Cornish put up a strong effort.
Madeleine competed int he 500m swim in a time of 8:01, while Dylan C entered the 1000m event and finished in a time of 14:46. Dylan M and Lynton both improved on their previouse efforts, Dylan M smashed his previous effort finishing in a time of 16:13 and Lynton improved with a time of 14:37, almost four and a half minutes better than his 2014 time.

“This swim is very different from the pool swimming they are used to; there’s no black line to follow! Conditions were rough and is was very hot and windy on the day. We’re very proud of the four swimmers who competed”. KSC head coach Jennifer Lonie said.

The Danger 1000 Ocean swim certainly was a challenge compared to swimming in a pool.
I swam first as I was only doing the Danger 500 and man am I glad I decided to do that and not the 1000, I mean apart from almost drowning and swallowing half the ocean I enjoyed it and I would, maybe with a little hesitation at first, do it again.

“It’s a challenge but so is life and if you’re not prepared to take on a challenge every so often you’re living a safe but pretty boring life.”

Dylan C, a first timer like me, took on the 1000m swim and finished with a very impressive time for a first timer. He said;

“Doing the Danger 1000 is a true test on you physically and mentally. It puts you into a very unfamiliar environment that swimming laps in a pool cannot properly prepare you for. This being my first year competing in it I didn’t know what to expect, but when I got out there things just seemed to flow. I was worrying about losing track of where I was going, but all you need to do is just follow the people in front of you and keep going. Next year I plan on doing the Danger 1000 again, and I would recommend it to anyone who wants to really test their limits.” 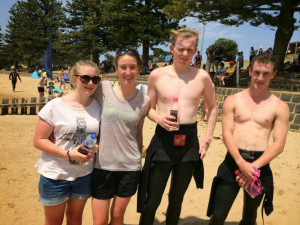 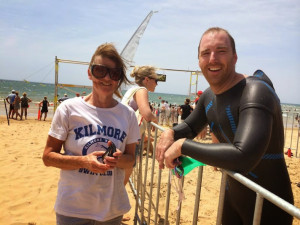